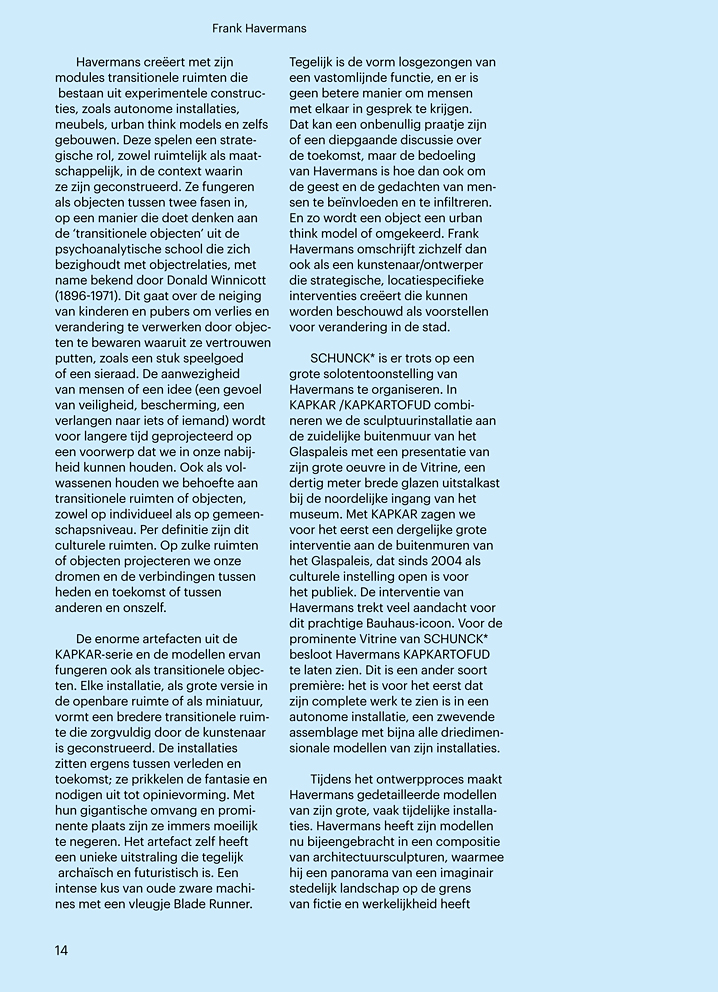 In a world where everything is about efficiency, speed and standardization, Frank Haverman’s (Breda, 1967) interventions provoke to mark time. First, the artefact catches your eye. Then your mind follows. Slowly, step-by-step, you wrap your mind around the object – this thing – on the wall. You start to question its function. It looks brutally rational. The steel-like geometric structure with armoured plating signal heavy-duty machinery. You brace yourself for an ignition, dark smoke plumes and the roaring sound of an engine powering up. But the mechanic beast remains inert, waiting patiently for orders to execute its mission. In the meantime, silence remains as you start you realize that its function might be a suggested one. It is machine to pretend, to blend and bend your first glance into a deep thought. What could it be good for? You slow your pace until you stand still in the middle of a busy square. Welcome to KAPKAR ZM-SB3-JH.

Havermans’ modules set up transitional spaces, consisting out of experimental constructions that include autonomous installations, furniture, urban thinks models, and even buildings. These play out a strategic roll, both a spatially and socially, in the context in which they are constructed. They function as in-betweens not unlike ‘transitional objects’, a term from the psychoanalytic school of object relations by Donald Winnicott (1896-1971) in particular. It describes children’s and adolescent’s tendency to cope with loss and change by keeping objects of confidence – a toy, a piece of jewellery. The presence of people or an idea (sense of safety, protection, a longing for something or someone) is projected and fixed in an object that can be kept close by. As adults we retain a need for transitional spaces, or objects, both on an individual and communal level. It is on such spaces or objects that we project dreams and connections between the present and the future and between others and us.

The huge artefacts from the KAPKAR – series as well as their models still function well as such transitional objects. Each of it in the big size version in public space, and complementary with the models as different bricks that constitute a wider transitional space constructed carefully by the artist. Lodged somewhere between the past and the future, they trigger fantasy and opinion making. As they are, with their gigantic size and prominent placing, very hard not to notice, the artefact itself has a certain appealing value somewhere between archaic and futuristic; an intense kiss of early heavy industries with a dose of Blade Runner. At the same time, their form distracts itself from a definite function: no better way to get people into discussion. Ranging from the obvious chat towards future-minded talks, Havermans clear intention is to affect and to infiltrate into people’s minds and thoughts. Indeed, it’s the point where an object becomes an urban think model and vice versa. Not surprisingly, Frank Havermans describes himself as an artist/designer who develops and makes strategic site-specific interventions that can be considered as proposals for urban change.

SCHUNCK* is proud to host a major museum solo of Havermans. KAPKAR /KAPKARTOFUND combines a sculptural installation on the external south wall of the Glaspaleis (Glass Palace) with a presentation of his prodigious oeuvre in the Vitrine, a 30 metre-wide glass cabinet at the north entrance of the museum. KAPKAR is first time that such a large-scale intervention has taken place on the exterior walls of the Glaspaleis. Open to public as a cultural institution since 2004, Havemans intervention draws major attention to this gorgeous icon of Bauhaus. For the prominent Vitrine of SCHUNCK*, Havermans decided to show KAPKARTOFUND. It is a primer in a different way: it is the first time that his entire body of work is on display in an autonomous installation. It is a free-floating assemblage that features nearly all three-dimensional models of his installations.

During the design process Havermans meticulously crafts models of his large-scale, often temporary, installations. Havermans wove the models into a composition of architectural sculptures, creating a panoramic view on an imaginary urban landscape between fiction and reality. The installation offers a complete overview of his distinct visual and material language. At the same time, each miniature – isolated from the context of the hosting structure – can be read as an afterimage of the physical and cultural spaces it was designed to invade. Haverman’s installations are not site-specific in that they fit or take the shape of a particular structure. Going further, they are designed to absorb, accentuate and change the spatial and structural features of its host. The eccentric, strangely futuristic, sculptures enter into a symbiotic relation with their context, placing a spatial situation into a new arrangement. On an aesthetic level, they instil a mixture of alienation and recognition of industrial functionalism. Upon a closer inspection the mystery as to their identity only deepens.

With these qualities, Haverman’s work is very suitable for an intervention into the distinctly modernist architecture of the monumental SCHUNCK* Glaspaleis. KAPKAR, inspired by the demolished head frame of the Oranje Nassau III mining shaft, breaks into the perfect modernist architecture of the building that stands as a symbol of past and present cultural ambition in the region. Located in the city centre of Heerlen, the former heart of the large-scale mining industry, the Glaspaleis was designed in 1935 by the Dutch architect Fritz Peutz as a luxurious warehouse. Peter Schunck, a local fabric merchant, commissioned the design. The result was a highly modern building where merchandise was displayed in daylight like a marketplace (the safety clothing for the mineworkers was sold in the basement). The design was revolutionary at the time, especially in Limburg.

The bustling mining industry transformed the region overnight, changing it from a sleepy rural area into a modern industrial society. New structures were erected to facilitate the needs of a population that by 1930s had undergone an eightfold increase. Heerlen alone rose from a population of 5.000 in 1900 to 47.000 in 1930 and 76.000 in 1968. The Glaspaleis was the ultimate expression of the prosperity and ambition that came with the mining industry. The style is largely known as het Nieuwe Bouwen, which is roughly a collective name for Modernism, Bauhaus and International Style. It is on the UNESCO list of the 100 most remarkable buildings in The Netherlands, and it on the list of the Union of International Architects as one of the most important buildings of the 20th century.

The closing of the mines between 1969 and 1974, which formed and permanently altered the region, set in motion an economic and social decline that went hand in hand with a painstaking search for a new identity and regeneration. By the 1990s the Glaspaleis symbolized the general state of the region once again, only this time as a dilapidated building. At one point squatters occupied it and there were even plans to tear down the building. Efforts by Nic Tummers, Wiel Arets and others prevented this. The building was eventually bought by the City to turn it into a cultural centre. Marking the first steps of a renewed cultural ambition in Heerlen, the building was reopened in 2004 after a thorough renovation by architects Wiel Arets and Jo Coenen. Since 2009 it once again carries the name SCHUNCK*, an interdisciplinary organization with a museum for contemporary art and architecture, public library, music as well as dancing school.

The landing of KAPKAR on the Glaspaleis is provocative and urgent for several reasons. It is a daring intervention into modernist perfection, urging a reinterpretation of its structure, status and more generally of the nature of architecture. In the context of post-industrial regeneration and revaluation of the region and its future, Havermans introduces new ways in both recharging the public space and reconnecting the present to a broken up and loaded past. The Dutch mining past is perhaps not distinctive for the economic implications of its abrupt closure. What is distinctive, however, is that the material remnants of the mining industry were systematically erased from the landscape, even including spoil tips, during a government operation called “From black to green”. What remains are isolated structures and buildings in the context of decentred sprawl of urban areas that formed around the coalmines. Only one steel head frame remains: the Oranje Nassau I, which it currently houses a small museum that commemorates Dutch miners and the hard manual labour they did.

The result of the erasure is paradoxical. Due to the lack of the obvious mining infrastructure – most notably the imposing steel head frames and spoil tips on the horizon – it is as if large-scale mining never occurred. But the social fabric (and challenges) and distinctly urban traits are, in fact, direct products of the mining industry and subsequent attempts to erase it. Mining heritage is part of the every day experience of living here; it is grafted onto the landscape, and it is very much alive in the collective memory. The Year of the Mines 2015 (M2015), a theme year with a cultural program on the impact of the mines and the current development of the region, marked an important step in addressing this situation. It was an expression by the community of an on-going wish in coming to terms with the post-industrial challenges and opportunities in the region. KAPKAR connects the past to the present. It is a transitional object that opens up a space between the past and future and between the inner and outer world, which is also the space between people. It places the iconic steel head frames once again at the heart of the region, reuniting mining infrastructure with the cultural ambition that is represented by the Glaspaleis.

As such, KAPKAR is an inspirational form of materializing and (re-)imagining a largely immaterial heritage; a way of finding cohesion and meaning by connecting isolated remnants of the past. Without building or deleting structures for a rejuvenation of public space, Havermans proposes a mezzanine, or floor between floors, in architectural intervention. It is a form of architectural fiction that is material, yet its impact is purely spatial and imaginary. In turn, TOFUND, like the former Dutch mining region, is also a mezzanine: it floats between the past and the future. It is a landing space for exploration, where lines need to be drawn and stories need telling to give meaning and identity.

We don’t know yet how the surroundings of Glaspaleis will look like in the near future, as the city centre heads towards major changes of its urban infrastructure with an Internationale Bauausstellung coming up in 2020. But it is sure that Havermans takes an unequivocal stand on it. KAPKAR and KAPKARTOFUD are proposals for urban change. Their ambiguous imagery – as form of material architecture fiction based on a real past – couldn’t be more functional and clear: they demand the need for transitional, cultural spaces within concrete, glass and steal. They materialize the need for social interaction and for highlighting the undefined, open or the empty. In doing so, they free up space for latitude on a battleground of interests in the heart not so much of a city, but of a community that is supported by its built surroundings. That’s pretty much of a claim for urban change, but Havermans carries it out here.