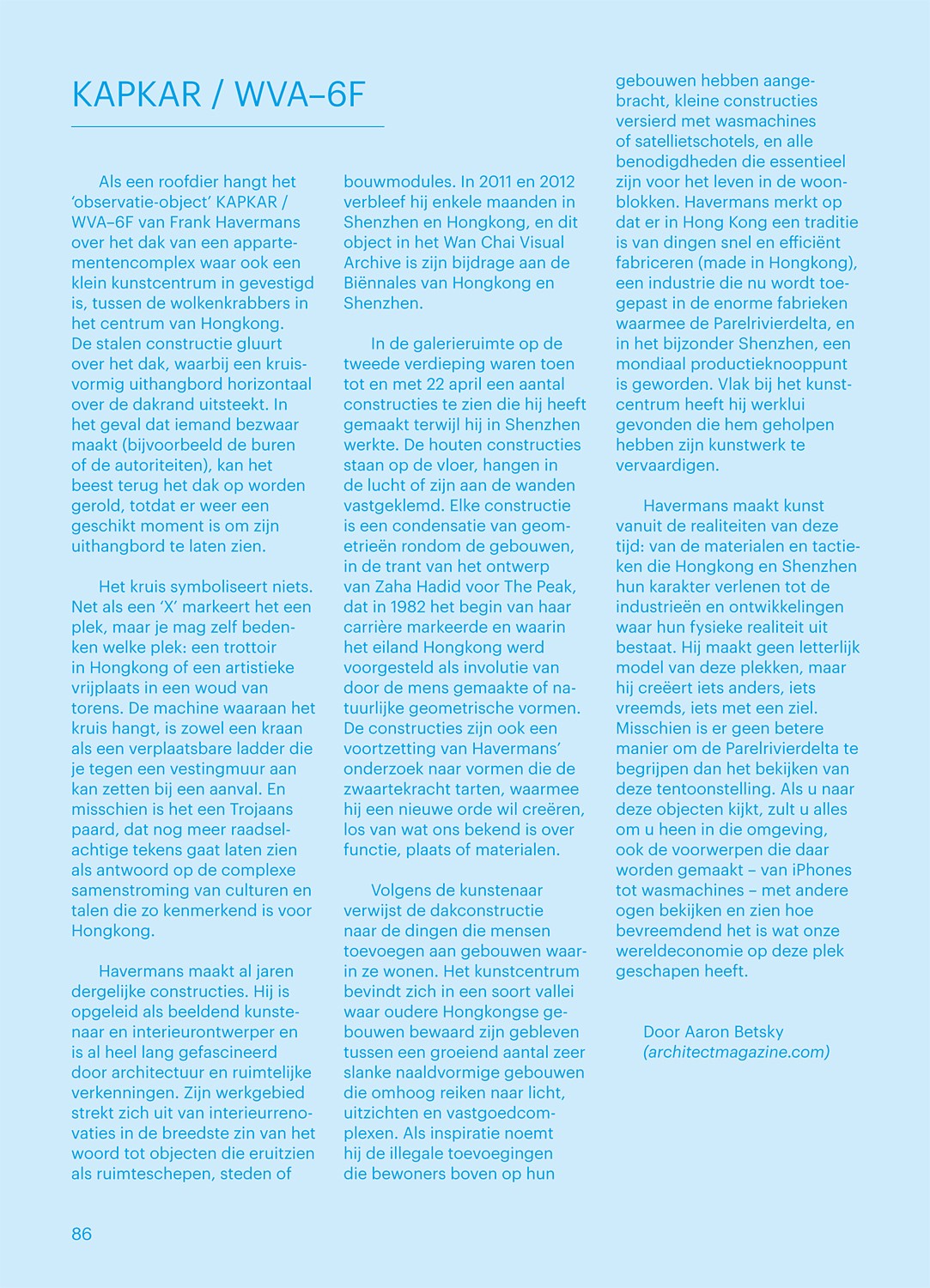 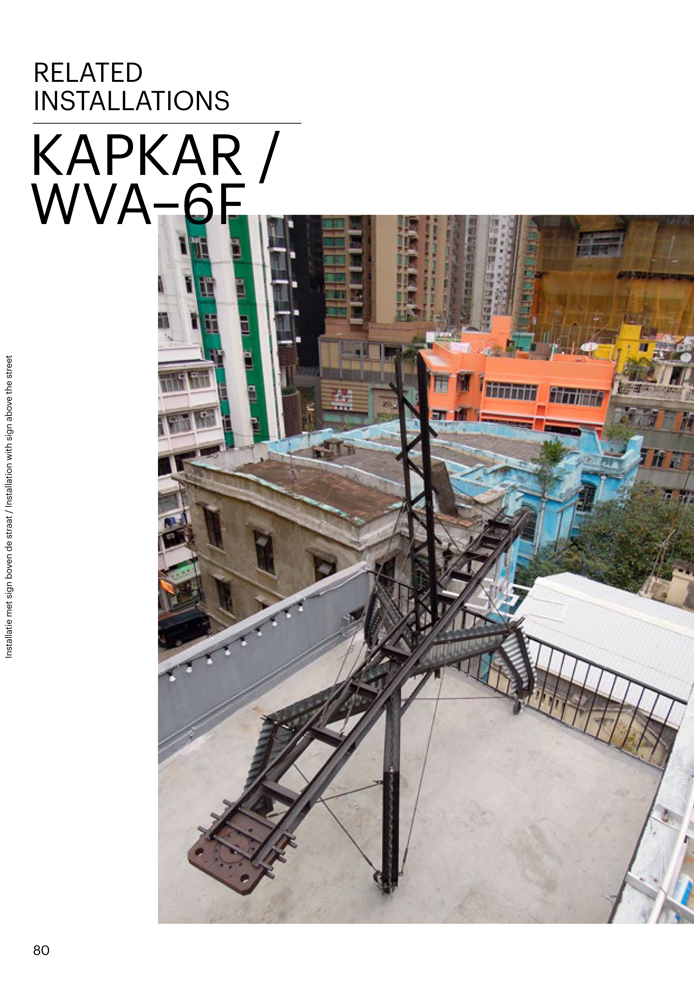 Like a beast of pray, Frank Havermans’s KAPKAR/WVA-6F Observatory object hangs over the roof of a small arts center and apartment building hunkering down in the middle of the skyscrapers of Hong Kong’s Central district. The steel structure peers over the roof, displaying a cross-formed sign that hangs, horizontally, beyond the eaves. Just in case you (or the authorities, or the neighbors) might take offense, the animal can roll back onto the roof, lying in wait to display its mark at the right time.

The cross is a symbol of nothing. Like an “X” it marks the spot, though what spot is up to your imagination—just a sidewalk in Hong Kong, or a place of art within the forest of towers. The machine that suspends is both a crane and the kind of movable stairs you might wheel up to a fortress if you wanted to conquer its walls. Perhaps it is a Trojan horse that is going to release more enigmatic signs to answer to the complex confluence of cultures and languages that make up Hong Kong.

Havermans has been creating such structures for several years. Trained as an artist and an interior designer, he has long been fascinated by architecture and spatial explorations. His works extends from interior renovations and what you might think of as furniture, to objects that might be models for spaceships, cities, or building modules. For the last few months, he has been living in Shenzhen and Hong Kong, and this exhibit in the Wan Chai Visual Archive is his (unofficial) contribution to the Hong Kong and Shenzhen Biennale.

In the gallery space on the second floor, several of the constructions he created while living in Shenzhen are on display through April 22nd. They are wood constructions that inhabit the floor, hang in mid-air, or hug the walls. Each is a condensation of the geometries that surround the buildings in the way in which Zaha Hadid’s The Peak design, which launched her career in 1982, imagined Hong Kong Island as an involution of geometric shapes, whether human-made or natural. They are also a continuation of Havermans’ explorations of forms resisting gravity to create a new order outside of what we know about function, place, or materials.

The roof construction refers, according to the artist, to the things people add onto the structures they inhabit. The arts center sits in a sort of valley where some of Hong Kong’s older structures remain amid an ever-growing collection of thin needles reaching up towards light, views, and real estate multiples. He points out the illegal additions inhabitants have propped on top of their buildings, small balconies festooned with equipment to wash or to receive satellite information, and all the equipment that feeds the lives inside the blocks, as inspiration. He also notes that Hong Kong started the tradition of putting things together in fast and ingenious ways, a kind of industry that is now meted out in the miles and miles of factories that have made Shenzhen and the Pearl River delta the world’s manufacturing hub. He was able to find skilled workmen to help him construct his art within a few blocks of the arts center.

Havermans is making art out of the realities of this area, from the materials and tactics that give Hong Kong and Shenzhen its character, to the industries and developments that are its physical reality. Rather than making a model of these places, he is creating something other, something strange, something animate. You might not be able to understand the Pearl River delta better by seeing this exhibition, but these objects will make you look at what is all around you there, and maybe at the objects, from iPhones to washing machines, that are made there, with eyes that see the strangeness of what our global economy has created in this particular place.