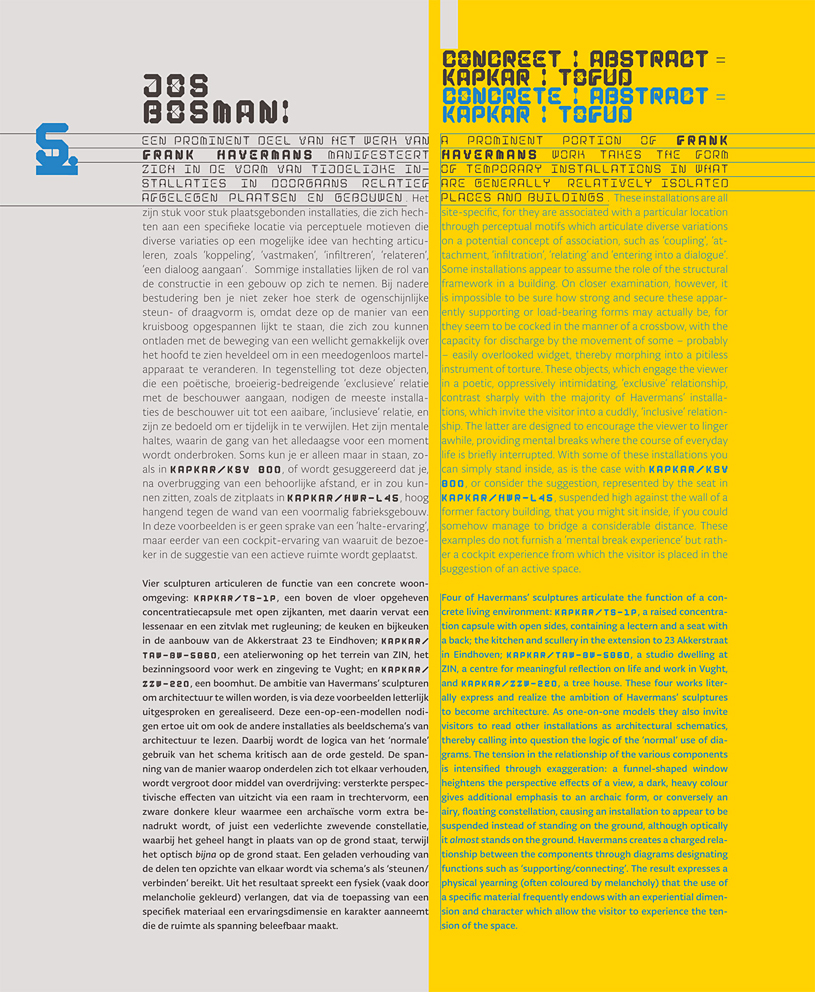 A prominent portion of Frank Havermans’ work takes the form of temporary installations in what are – generally – relatively isolated places and buildings. These installations are all site-specific, for they are associated with a particular location through perceptual motifs which articulate diverse variations on a potential concept of association, such as ‘coupling’, ‘attachment, ‘infiltration’, ‘relating’ and ‘entering into a dialogue’. Some installations appear to assume the role of the structural framework in a building. On closer examination, however, it is impossible to be sure how strong and secure these apparently supporting or load-bearing forms may actually be, for they seem to be cocked in the manner of a crossbow, with the capacity for discharge by the movement of some – probably – easily overlooked widget, thereby morphing into a pitiless instrument of torture. These objects, which engage the viewer in a poetic, oppressively intimidating, ‘exclusive’ relationship, contrast sharply with the majority of Havermans’ installations, which invite the visitor into a cuddly, ‘inclusive’ relationship. The latter are designed to encourage the viewer to linger awhile, providing mental breaks where the course of everyday life is briefly interrupted. With some of these installations you can simply stand inside, as is the case with KAPKAR/KSV 800, or consider the suggestion, represented by the seat in KAPKAR/HWR-L45, suspended high against the wall of a former factory building, that you might sit inside, if you could somehow manage to bridge a considerable distance. These examples do not furnish a ‘mental break experience’ but rather a cockpit experience from which the visitor is placed in the suggestion of an active space.

Four of Havermans’ sculptures articulate the function of a concrete living environment: KAPKAR/TS-1P, a raised concentration capsule with open sides, containing a lectern and a seat with a back; the kitchen and scullery in the extension to 23 Akkerstraat in Eindhoven; KAPKAR/TAW-BW-5860, a studio dwelling at ZIN, a centre for meaningful reflection on life and work in Vught, and KAPKAR/ZZW-220, a tree house. These four works literally express and realize the ambition of Havermans’ sculptures to become architecture. As one-on-one models they also invite visitors to read other installations as architectural schematics, thereby calling into question the logic of the ‘normal’ use of diagrams. The tension in the relationship of the various components is intensified through exaggeration: a funnel-shaped window heightens the perspective effects of a view, a dark, heavy colour gives additional emphasis to an archaic form, or conversely an airy, floating constellation, causing an installation to appear to be suspended instead of standing on the ground, although optically it almost stands on the ground. Havermans creates a charged relationship between the components through diagrams designating functions such as ‘supporting/connecting’. The result expresses a physical yearning (often coloured by melancholy) that the use of a specific material frequently endows with an experiential dimension and character which allow the visitor to experience the tension of the space.

Havermans produces scale models in which he incorporates all the relevant information, premises, principles, etcetera. He works through the structural problems of the projected installation in this model design phase, and personally checks every structural decision, conceived through the model, before testing susceptible components. The model and the tests are followed by the construction of the installation in sections which will only be assembled, like a puzzle, at the final location.

Havermans’ installations create the suggestive impression that permanent buildings could also be assembled with the same degree of pleasure, that such buildings could permanently convey the pleasure of this ‘model status’. The extension to 23 Akkerstraat in Eindhoven and the artist’s dwelling in Vught fulfil some of this promise: in addition to being ‘concrete’, in that they are designs which have been constructed, these spaces also appear to have been modelled and drawn, for they have been made by the hands of the artist, who has consciously deployed all the traces left by the process of making as part of the work’s expression.

Havermans shares with architect Wiel Arets the challenge of charging the heritage of modern architecture with a physical experience of space, just as the traces cited above succeed in adding a form of life ‘patina’ to a work. One element of Havermans’ and Arets’ affinity is a common reference: Aret’s publication in relation to the Maaskant Prize for Young Architects, which he received in 1989, was suggestively illustrated with drawings by Wendi Bakker (drawings also characterized by an appearance of patina), who was motivated by her ideal of tactile and refined construction to propose a building project for execution by artists rather than a contractor, and to invite Frank Havermans to join her in transforming an extension at 23 Akkerstraat  in Eindhoven.

The drawings and models from Havermans’ TOFUD series (from 2006) take up the thread of the utopian studies produced by Constant Nieuwenhuys and Lebbeus Woods (Woods’ Hermitage installation in De Witte Dame in Eindhoven, autumn 1998, made a great impression on Havermans). In this series Havermans represents an inventiveness of form which he believes is naturally generated by hybrid combinations of infrastructure and building in contemporary mega-cities. He imagines that in the future these cities will increasingly resemble his TOFUD images. A connection between Havermans’ TOFUD and KAPKAR works can be discerned in their form of constructivism. However, the two series differ enormously in the way in which they have been conceived and made: the KAPKAR works engage in a one-to-one relationship with a location, while the TOFUD works give expression to complex relations. On the subject of difference these two ‘categories’ clearly represent two entirely disparate forms of engagement: KAPKAR is about making concrete specific concepts such as tension, structure, connection and material, while TOFUD is concerned with abstract, global thinking through the aid of interpretative instruments: a kind of thinking which allows the grand gesture to prevail over the examination of spatial and material decisions on a scale of immediate vicinity. Concrete : abstract = KAPKAR : TOFUD.