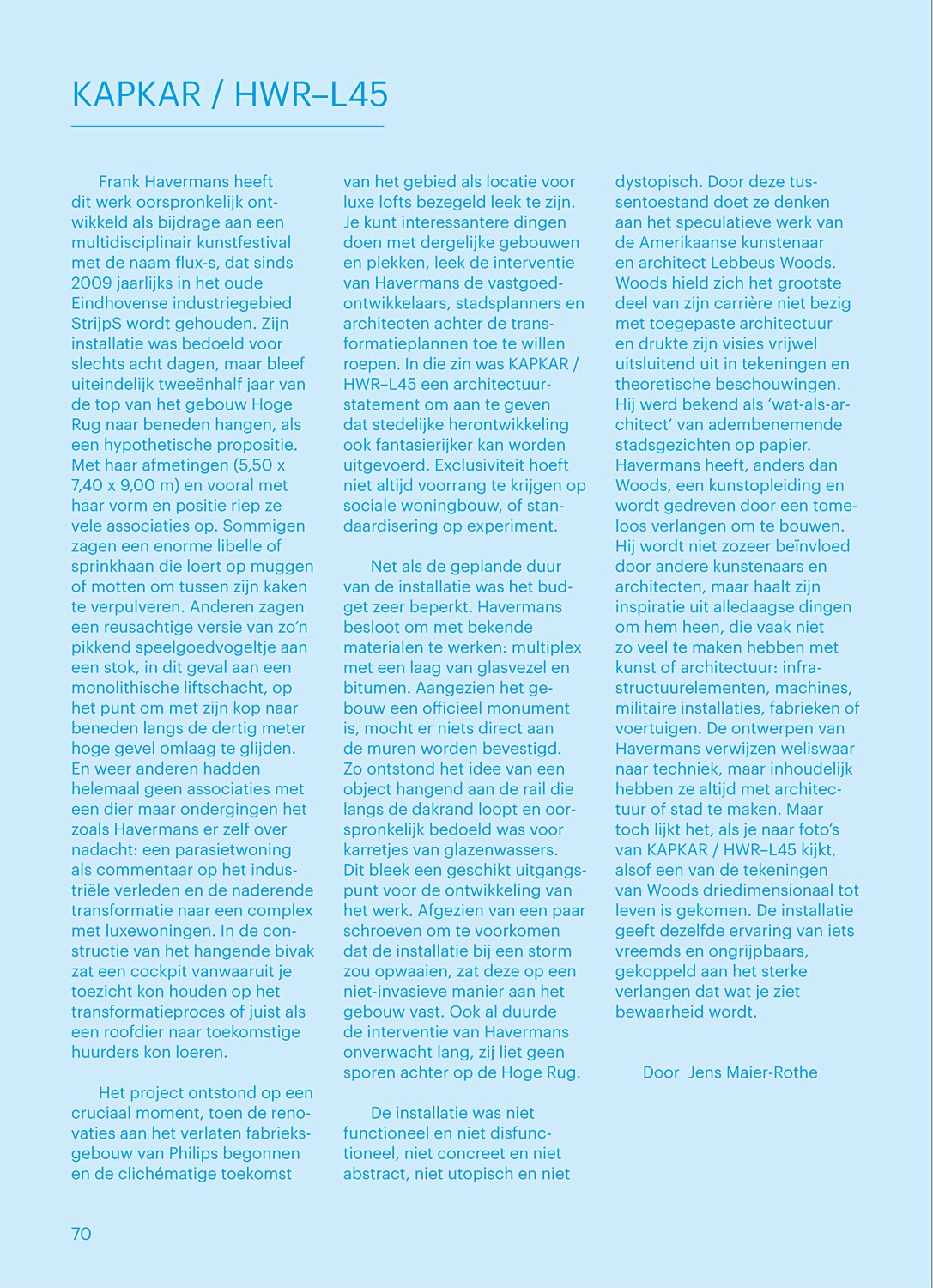 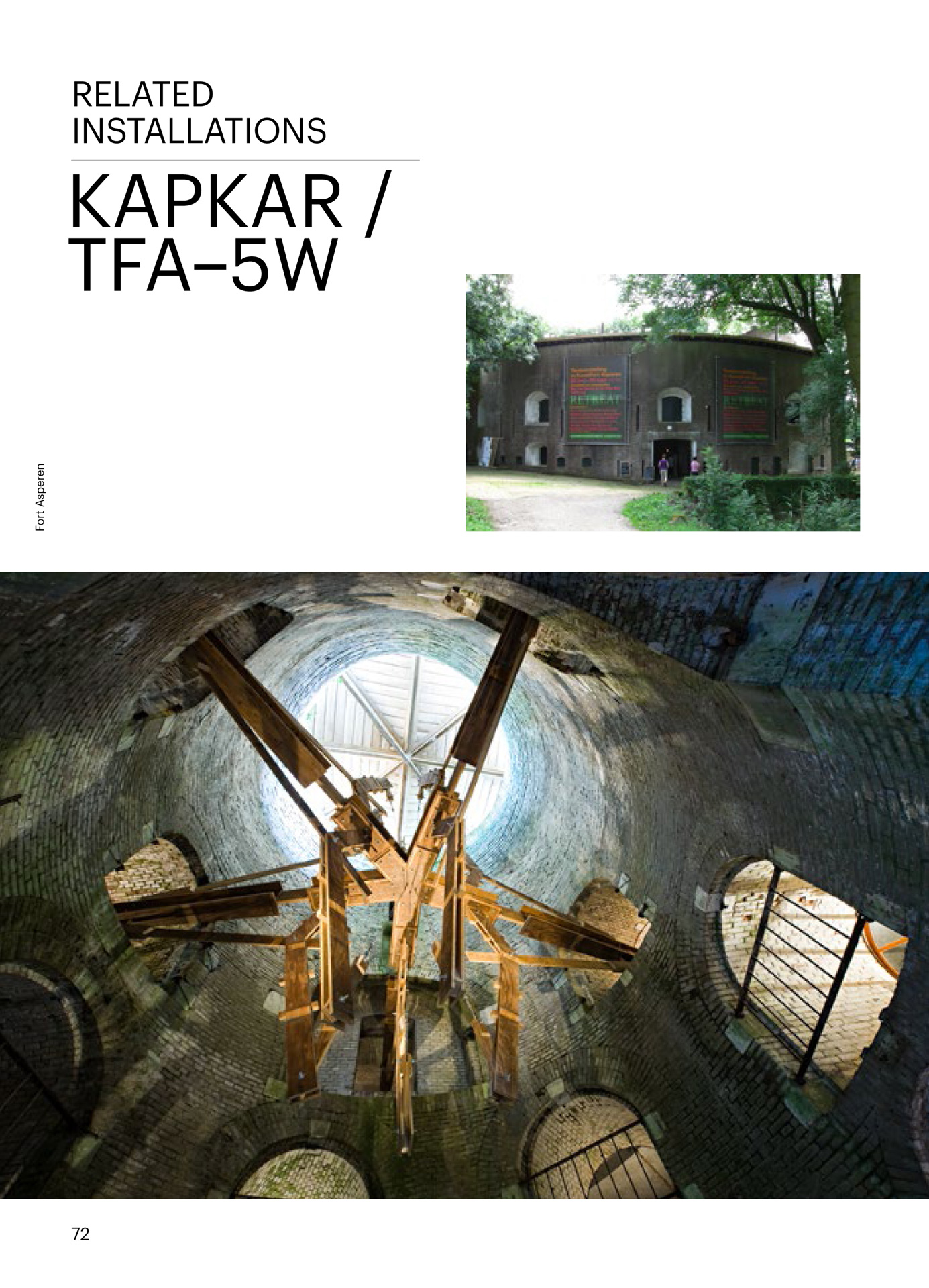 Frank Havermans originally developed this work as contribution to a cross-disciplinary art festival by the name of flux-s, which is taking place annually since 2009 inside an old industrial area in Eindhoven called Strijp-S. His installation was first meant to stay only for eight days and ended up sticking around for 2,5 years, hanging head over heels from the top of the Hoge Rug building like a hypothetical proposition. Its dimensions (5.50 x W 7.40 x H 9.00 m), particular form and placement evoke many associations. Some might see a giant dragonfly or locust on the qui vive, hoping to snatch some midge or moth and slice it up between its mandibles. Some might see an oversized wooden woodpecker toy clamped onto the monolithic lift shaft, about to peck its way down head first along the thirty meter long facade. And yet others might have no animal associations at all, seeing it as what Havermans himself thought of when conceiving it: a parasitical apartment as commentary on the area’s industrial past and its pending conversion into an upscale housing complex. The hanging bivak construction housed a cockpit from which one could either preside over this transition process, or, conversely, prey on incoming future tenants like a predator.

The project’s inception came at a crucial point in time when renovations on the abandoned Philips factory building began, and the area’s future as formulaic upper-class residence seemed to be sealed. You can do more interesting things with buildings and places like this, Havermans intervention seemed to bawl at the real estate developers, city planners and architects behind the makeover plans. In that sense, the KAPKAR / HWR-L45 was an architectural marker that indicated how urban redevelopment can be more imaginative than what the mainstream agenda usually generates when placing exclusivity before social housing and norm before experimentation.

As the planned duration of this installation was very limited, so was the budget. Havermans decided to work with familiar materials: plywood covered with a layer of fiberglass and bitumen. Because the building is listed as monument, nothing could be fixed directly onto its walls. And so the idea to mount an object on the rails running along the roof-edge, originally allowing window cleaner carts to move around the building, became the starting point for developing the work. Except a few screws to prevent it from being blown away by a storm, the whole installation held onto the building in a non-invasive way. Despite the unexpected duration of their liaison, Havermans’ intervention left no traces on the Hoge Rug.

Its intermediate state of being neither functional nor dysfunctional, neither concrete nor abstract, neither utopian nor dystopian, recalls the speculative work of American artist and architect Lebbeus Woods. For the most part of his career, Woods refrained from applied architecture and expressed his visions almost exclusively in drawings and theory, thus becoming known as What if? architect of breathtaking cityscapes on paper. Havermans, though, is trained as an artist and driven by an untamed desire to build. Less influenced by artists or architects, he draws inspirations from everyday things that surround him and often have less to do with art or architecture than with infrastructural elements, machines, military equipment, factories or means of transportation. Havermans’ designs refer to engineering while his content is always architectural or urban. And yet, looking at photos of the KAPKAR / HWR-L45 feels as if one of Woods’ drawings had taken on a three-dimensional form, bearing the same sensation of something strangely unseizable paired with the strong desire for it to become true.