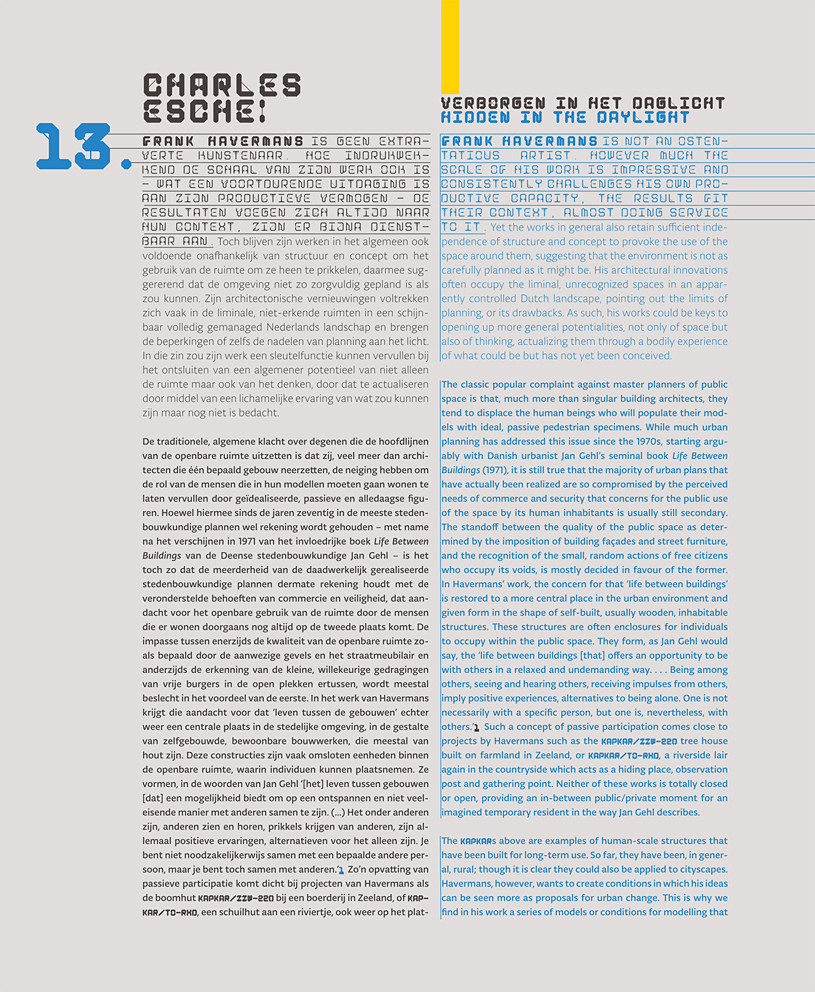 Hidden in the Daylight

Frank Havermans is not an ostentatious artist. However much the scale of his work is impressive and consistently challenges his own productive capacity, the results fits to their context, almost doing service to it. Yet, the works in general also retain sufficient independence of structure and concept to provoke the use of the space around them, suggesting that the environment is not as carefully planned as it might be. His architectural innovations often occupy the liminal, unrecognised spaces in an apparently controlled Dutch landscape, pointing out the limits of planning, or its drawbacks. As such, his works could be keys to open up more general potentialities not only of space but also of thinking, actualising them through a bodily experience of what could be but was not yet conceived.

The classic popular complaint against master planners of public space is that, much more than singular building architects, they tend to displace the role of the human beings who will populate their models with ideal, passive pedestrian specimens. While much urban planning has addressed this issue since in 1970s, starting arguably with the seminal books by Danish urbanist Jan Gehl’s Life Between Buildings that appeared in 1971, it is still true that the majority of actually built urban plans are so compromised by the perceived needs of commerce and security that concerns for the public use of the space by its human inhabitants is usually still secondary. The stand off between the quality of the public space as determined by the imposition of building facades and street furniture, versus the recognition of the small, random actions of free citizens who occupy its voids, is mostly answered in favour of the former. In Havermans’s work, the concern for that ‘life between buildings’ is however restored to a more central place in the urban environment and given form in the shape of self-built, usually wooden inhabitable structures. These structures are often enclosures for individuals to occupy within the public space. They form, as Jan Gehl would say, “[the] life between buildings [that] offers an opportunity to be with others in a relaxed and undemanding way. Being among others, seeing and hearing others, receiving impulses from others, imply positive experiences, alternatives to being alone. One is not necessarily with a specific person, but one is, nevertheless, with others.”[1] Such a concept of passive participation comes close to projects by Havermans such as the KAPKAR/ZZW-220 tree house built on farmland in Zeeland, or KAPKAR/TO-RXD, a riverside lair again in the countryside which acts as a hiding place, observation post and gathering point. Nether of these works is totally closed or open, providing this in-between public/private moment for an imagined temporary resident in the way Jan Gehl describes.

The KAPKARs above are examples of human scale structures that have been built for long term use. They have been up to now generally rural though it is clear they could also be applied to cityscapes. Havermans however, also wants to create conditions in which his ideas can be seen more as proposals for urban change. In order to achieve this, we find in his work, a series of models or conditions for modelling that are distantly reminiscent of Constant’s New Babylon project and of other proposals for fantastic architecture within an art context.[2] For instance, they sprout within and around his TOFUD (Temporary Office for Urban Design) projects in Eindhoven, Vlissingen and Amsterdam. These strangely organic, wooden ‘think models’ as Havermans calls them, are modest proposals often targeted at specific urban situations such as the a city quarter or development zone. These models emerge out of a period as a guest artist or urban planner in a particular situation, in which he is not only able to study and think about the urban plan around him, but also experience the life of the city and encounter its residents. In this way, more accurate or appropriate solutions to the needs of an environment can emerge, translated into three dimensions in models that can also be subject to interpretations and imaginative expansion. Alongside the models, the artist also makes carefully crafted drawings that vaguely recall architectural plans while being closer to organic than built forms. This way of playing with two and three dimensions is most reminiscent of Lissitzky’s approach where even the smallest sketch bursts from the page, full of the potential to expand to a building or even city scale. Like Lissitzky, Havermans’ projects remain on the drawing board, as it were, but the possibility is there to move from the modelling stage into producing actual urban plans. Additionally, while Lissitzky remained fixed on looking from the hierarchical bird’s eye view of the city planner, the modesty of Havermans’ actual building work in wood suggests plans that would be more down to earth, flexible and open to discussions with the intended ‘recipients’ of improvements to their urban environments..

A third strand in Havermans’ production are works that are more or less dependent on, or viral growths from, existing architecture. A piece, KAPKAR/HWR-L45, made for the Flux-S festival in Eindhoven illustrates this perfectly. The wooden framework clings on the façade of a former Philips factory building long since abandoned as a production site. It is wedged between the regular fenestration of the repeated units on a column of its host building, disturbing its regularity and suggesting that the building itself is in movement from its Fordist pattern of use. However such informality is inaccessible and placed on the outside of the building rather than comfortably located inside. This suggest that the possible new use of the building is not yet at home here, that it squats unofficially on the surface, perhaps waiting for permission to enter but also wary of full instrumentalisation in the creative economy for which this new area of Eindhoven city has been reserved. In this mildly critical aspect, it again recalls late 1960s and early 1970s modes of architectural address, it this case the After the Planners book of Robert Goodman.[3] In this book, Goodman describes the oppositional tactics necessary to undermine urban planning, culminating in a marvellous description of the People’s Park in Berkeley, California where a group of citizens set about turning an unwanted car park into useful public space, only to be forcibly removed by the state police. He called these kind of actions “guerrilla architecture” crried out by small groups spontaneously combining themselves together for immediate production. For a planner like Goodman, the only way to respond to, or anticipate, such actions was the hard work of walking the streets and talking to the residents at every opportunity. Havermans’ more modest guerrilla actions, such as the KAPKAR/HWR-L45, are subversive not in terms of their politics but in terms of their individual reliance on the actions of the artist/architect himself. By building and installing everything with his own hands, Havermans’ practically undermines the claims of architecture to functional divisions between construction and creativity, or workers by hand being unfavourably against the creative class of workers by brain. Havermans embodies both faculties, and often produces his work in the way a sculptor might – deciding in the moment on the shape and structure of even quite large scale buildings. This strict methodology of hand-building means that the essence of the works concerns not only questions of the use and abuse of land and planning, but also the nature of its production. In contrast to larger architectural entrepreneurs, whose engagement is usually restricted to the delivery and plans, drawings and technical solutions, Havermans selfimposed limitation means that he remains responsible for all aspects of the work. This parallels other developments in contemporary artistic practice, where the concept of self-organisation, as opposed to relying on existing channels of production and distribution, has been an important tendency from the mid-1990s onwards.

Frank Havermans’ works could therefore be understood not so much in terms of social building as in terms of self-construction. He creates spaces that are generally for only a few people, sometimes simply for one in which his hand and body has already touched and shaped every beam and joint. These self-constructions could then finally be understood as structures through which a human body can relate to the outside world while still staying secure within their own protected environment. In this sense, Havermans is arguably working within a deep Netherlandish tradition of the domestic as social space and the architectural interior as a way to explore the interiority of the mind. Climbing into one of his constructions as a viewer/visitor places us in a part in the artist’s mindset, but we remain a welcome intruder at the same time, an intruder who has to negotiate with the space itself rather than other inhabitants. At this point, the potential social tensions of the work emerge out of the exchange between flesh and timber, hidden from the view of others even when they take place in most open physical environment possible – the public space.

[2] I am thinking here particularly of Dick Higgins and his Something Else Press that produced a book called precisely “Fantastic Architecture’ including proposals for buildings from Oldenburg, Schneemann, Hausmann and manyothers.