I was initially commissioned to create wainscoting in the reception area, from material recycled from the old monastery. I made this more interesting, however, by incorporating the adjoining post room, allowing the establishment of a spatial connection between two differing spaces.

Both rooms are situated in the oldest part of the former monastery. At an earlier period, in the seventeenth century, this portion of the building had been a house, a fact still evident before the renovations.

During the building work a number of characteristic features, such as the wooden floors, the ceilings and some old walls, were removed. The only original elements you can still see inside are the four large windows in the two exterior walls which face each other. One of these exterior walls is now an inside wall. I used the shape and format of these large windows as a starting point for the design.

I copied the form of the windows on a 1:1 scale, rotated these copies 90 and 180 degrees and set them in a wall between the two spaces. Giving depth to the 60 x 54 cm ‘window panes’ created boxes which serve as cupboards in the post room. Stationery is kept in the cupboard to the right. Post can be sorted on a counter at standing height. Boxes of supplies are kept in the vertical cupboard to the left. The back of these cupboards is made of planks from the bedrooms once used by novices. These closed backs can be seen in the reception area.

Thus the appearance of the reception area is determined by the functional character of the post room. Both rooms contain the same form with a different function: on one side there is an open version, on the other a closed. 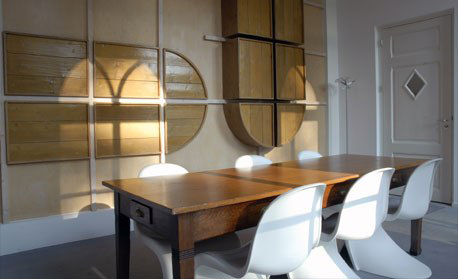 ‘Frank Havermans used materials found on the building site to design a piece of furniture which creates both a partition and a connection between the reception and the post room. It integrates the dimensions of existing architectural features .’