Living for one artist

In the grounds of Huize Steenwijk in Vught is an old monastery of the Tilburg Friars. Redeveloped by Marx & Steketee architects, this monastery is currently used by ZIN in Werk, an organization concerned with bringing meaning to work.

At the centre of the estate, detached from the monastery, is a freestanding building. Used in the past as a pigsty, a hayloft and a tool store, but mainly as a store for fruit from the estate’s own orchards, the old barn now serves as a guest studio. As the first guest artist in this studio, I was allocated the task of making the barn fit for temporary accommodation in an unusual yet elementary fashion. It was my second commission on the estate, after Wand Ontvangstkamer/Postkamer [Wall Reception/Post Room].

The barn is 15 metres long, 7 metres wide and 7.5 metres high. It is built of brick with a traditional wooden roof construction of four collar beam trusses with anchor beams secured in the brickwork of the walls. 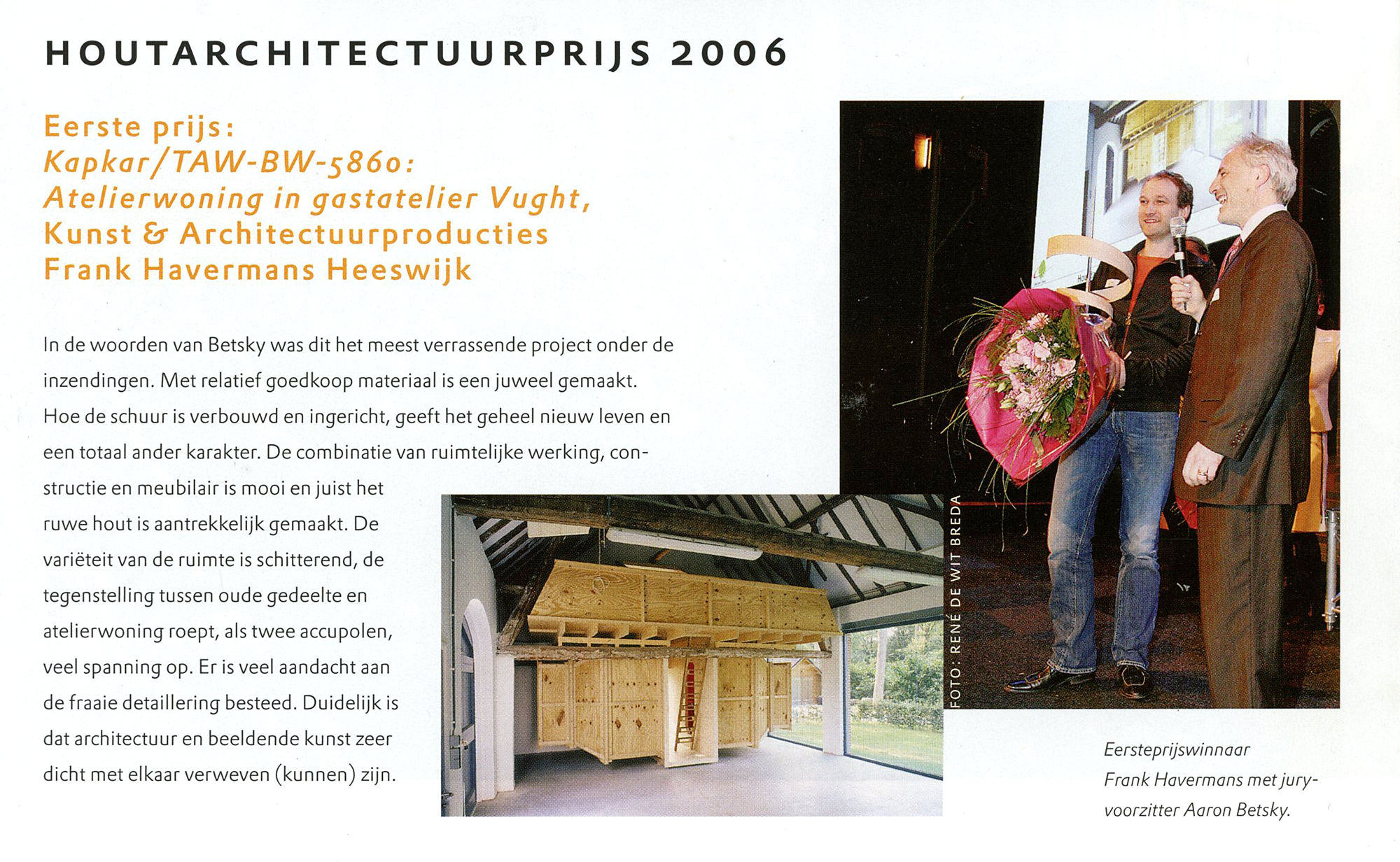 During the building’s renovation, the north wall was entirely removed and rebuilt in traditional brickwork; five new, large windows were also inserted, their dimensions based on the size of the sections between the trusses.

A feature of the original building was the rear section where both the anchor beam of the fourth truss and the anchor beam at the gable end were positioned more than a metre below the other beams. This provided me with the initial inspiration for my design for a studio dwelling. It was clear to me from the beginning that the roof construction had to be retained and, where possible, highlighted.

Luxury and comfort lead to automatic actions which in turn engender mental stupefaction. Spatial experience and simplicity in use are therefore an absolute must for a workspace; contact with your work must also be as constant as possible. You should be able to ‘hide’ from your work, but not by closing a door behind you.

The KAPKAR/TAW-BW-5860 studio dwelling is a free hanging construction which appears both independent and dependent in the space. Dependent in the sense that the construction is supported by the existing beam structure and independent in its symbiotic integration as a separate, contemporary element. It is made of pine construction plywood, a modern application of the same wood as that of the beams on which it rests. Although this element seems a complex structure, it is actually quite simple in its organization. Technical fittings and installations are on the outside wherever construction allows, to keep the interior spaces as pure as possible.

I started by placing a flat attic floor on the slanting anchor beams. Around this I fitted a parapet which follows the slant of the truss leg. This causes the entire construction to appear to merge with the roof structure.

In the centre of the attic floor I made a vertical passage which widens as it angles upwards to connect with an opening in the barn’s gable end. This passage divides the upper storey into two spaces, with a sleeping area to the left and a living area to the right. On the lower level the passage breaks 20 cm through the end wall, where once there was a pig hatch; clear glass allows daylight to enter through this opening and split the studio dwelling visually into two sections. I then suspended three identical volumes from this passage. Two of these are beneath the attic floor, at ground floor level; the space to the left serves as a shower room and lavatory, the space to the right as a kitchen. The third volume, above the attic floor, is turned; it projects outside through the end gable and is fitted with a large pane of glass. This volume is the opposite of a traditional balcony, an outside space that is brought inside, for it is an inside space that has been drawn outside. It has a view of the estate and the graveyard, and offers a place for thought and meditation. 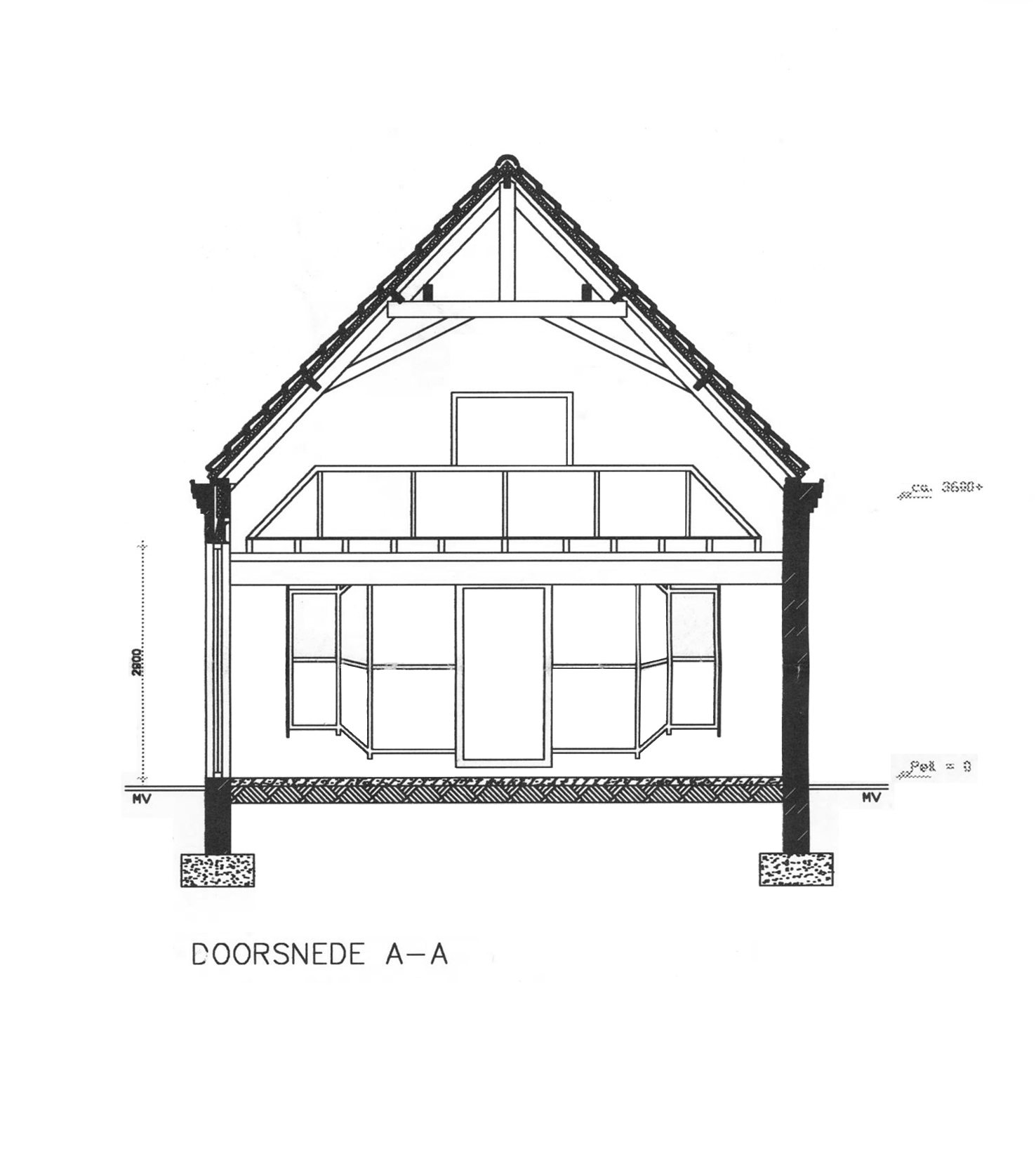